CADENCE  -- a brilliant Toronto a Cappella male quartet recently won the Harmony Sweeps semifinals in New York, and will be going to California in early May to try their luck at the finals!  Hampton Avenue's Dylan Bell is the newest member of Cadence, and if you get a chance to check out this group -- Do!!!! They're FANTASTIC!!!

Check out the Upcoming Section for details

Finally the new CD is ready for the world to hear.  Entitled "A Gift of Harmony with love from Debbie Fleming" -- it is a compilation of Debbie Fleming's jazzy vocal arrangements -- from familiar works such as a '40's Big Band medley -- to her own original jazz, pop and Latin numbers. There are a couple of bonus tracks at the end -- the Canadian and U.S. Anthems arranged in a more jazz-like manner.  All the arrangements are for a cappella voices -- very instrumental in conception -- with Tom Lillington's bass keeping the groove going, and the rest of the voices singing leads, rhythm and horn shots.  Since Hampton Avenue as a full group is on hiatus, The Hampton 4 -- Deb, Suba, Dylan and Tom recorded most of the tunes, overdubbing all parts -- just like the Singers Unlimited did a number of years ago.  The result is a very interesting creamy blend and a cohesive sound arrived at only by people who have been singing together for 6 years, and being inside each other's heads with phrasing and interpretation.  Also appearing on a few tracks are Tim Olfert and Merry Anne Hutton.  Please check out some of our sound clips for this CD and our other 2 CDs in The Songs page.

The CD was recorded at Debbie's home studio, using a Mac computer and Logic Audio digital software.  It was a long hot summer, and all around were noises coming from rock-cutting saws and construction that had to be worked around.  The usual computer foulups stuck a wrench into the proceedings on more than a few occasions, but we plodded on, and had faith that this would be a very special CD.  David Norris-Elye of Mississauga Ontario kindly offered to mix and master the project in his home studio, with his fantastic gear and his incredible knowlege of great sounds and great music. He had the patience of Job, and with his help, we arrived at a very lovely musical offering.

Check it out.  If you want to order by mail, send a check for $21.00 to cover all costs to the address in    The Market   section, or you can use your credit card, and order a copy through our Shopping Cart in the Market section.   The vocal arrangements for the tunes on the CD are also available for sale, either by mail or the Shopping Cart.

Debbie, Suba Dylan and Tom, as The Hampton-4  have been appearing together in concert and performance since the larger Hampton Avenue group disbanded. They have plyed their wonderful harmonies at corporate functions and other venues, and will be performing some of the tunes from the new CD at the CD release party on April 29th.  They will be appearing in Elliot Lake on November 8th, for the concert series in Elliot Lake.  Keep watching our Upcoming section for more appearances by the Hampton-4.

Debbie, Suba, Dylan and Tom were very privileged to be part of The Toronto Studio Choir (directed by Debbie, and conducted most ably by Bill Elliott from LA) during the recording of the mega-country artist, Alan Jackson's Christmas CD, entitled "Let it Be Christmas"  The orchestra, conducted and arranged by Matt McCauley, and choir were recorded in Toronto Canada.  Under the production wand of Keith Stegall, it is a wonderful CD, Alan's pure incredibly tuneful voice being framed by gorgeous, lush orchestra and voices.  Check out Alan's website Alan Jackson

On July 8th, Tim assembled all his earthly belongings and moved out to his native British Columbia to be near his family.  We will sorely miss him -- he was such a valuable asset to Hampton Avenue as a singer, and a wonderful friend.  We hope he finds great success in B. C. and wish him love and luck.

Debbie Fleming, Hampton Avenue's director, was vocal contractor for "ringer-singers" in the Disney organization's remake of "The Music Man", shooting here in Toronto during the next few months,  starring Matthew Broderick.  Hamptonites Suba Sankaran, Dylan Bell, Tom Lillington and Debbie (better known as The Hampton 4) sang lustily with the movie cast members -- such songs as 76 Trombones, Trouble in River City, and a few more.

Hampton Avenue opened for  pianist Michael Kaeshammer and his virtuosic boogy-woogie jazz stylings,  at the beautiful Brockville Arts Center in Brockville on April 19th. This theatre is a wonderful venue for sound, and performing.  The audience was very warm and appreciative, and we were royally treated.   These Brockvillians are very sophisticated in their musical taste, and manage to attract top-notch musicians to their series every year.

That same afternoon, we performed for 750 students in the same hall -- and it was a lot of fun for all of us.  We got the kids singing, hooting and hollering,  clapping and vocal percussing (thanks to our own resident vocal percussionist Dylan Bell).

These 2 concerts left us on a high note, and mark the beginning of a hiatus for Hampton Avenue as performers for a while.

Hampton Avenue director Debbie Fleming was in attendance during a marvellous concert performed by Montreal's Sainte-Anne Singers in Ottawa on May 5th, 2001.   Under the brilliant directorship of Margo Keenan, this 20 voice ensemble sang material ranging from works of the middle ages to  pop music of present day.  Their vocal versatility was striking -- they fluidly could change their sound to fit the light semi-classical clarity of madrigals and motets, as well as French folk songs, and into the pop idiom. One of the highlights of the night was a doowop version of Billy Joel's "The Longest Time" sung by the men of the singers -- brought the house down!   The choir also tackled some challenging jazz harmonies, and some African rhythms, with the addition of some African percussion.   The arrangements had been very carefully chosen by Keenan, and were thrillingly written, and tunefully sung.

The highlight for Ms. Fleming was the performance of 2 songs recorded by Hampton Avenue, on their "Everybody Sing" CD -- The Gathering, and Baila.  It's hard to imagine a choir of 20 musicians being able to swing off those Cuban rhythms, but they did it in a most exciting manner.  The Gathering, written by Hampton Avenue's Larry Folk, was also very movingly performed by SAS member Jean-Marie François, as the rest of the choir provided the accompaniment.

For further information on this terrific Montreal choir, semi-finalists in the CBC Choral competition in 2002, please check out their website:

On April 2, 2000, CASA (The Contemporary A Cappella Society of America) www.casa.organnounced the official winners of the CARA Awards and Hampton Avenue is honoured and thrilled to have been awarded the Best Jazz Song Award--for our rendition of"In A Mellow Tone" from our new CD "Everybody Sing". This song is a brilliant arrangement by John Herberman, who also wrote the words and music to the incredibly challenging soli section in the middle of the song. We feel especially privileged, because we are one of the few Canadian groups to ever receive this award. The panel of judges receive thousands of recorded entries from all over the world, and we feel very privileged to share the honour of this award with San Francisco group Streetsounds, who tied with us for first place. Their winning song was Black and Blue, on their CD entitled Nightflight. It's a great privilege to share this honour with such a wonderful group.

Our second CD, entitled Everybody Sing is still being played by CBC across Canada, as well as by U.S. radio stations specializing in A Cappella. You can order the CD through our Market Section of this website.

In August 1999, we recorded in a studio in Woodbridge called Soundwerx,and we were thrilled with the atmosphere and co-operation from all involved in this operation. Our engineer, Mark Peters, was amazing to work with -- very patient and tolerant of the noisy, talkative and crazy people we are. Mark rolled with the flow, and kept us going when we felt we'd never get through it. 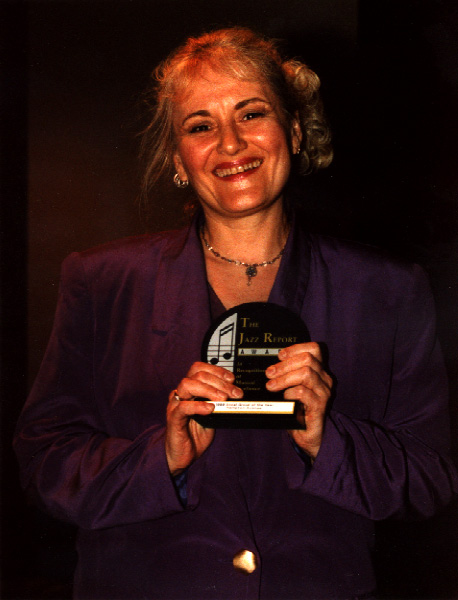 Hampton Avenue is thrilled to have won the Vocal Group of the Year award from prestigious Jazz Report Magazine for 1999. The awards ceremony was held on May 6, 1999 at the Holiday Inn on King St., West in downtown Toronto. It was a real thrill for Debbie to be picking up the impressive plexiglass award on the same stage, and in the same company as some of Canada's jazz legends, such as Rick Wilkins, Guido Basso, Moe Koffman, Don Thompson, Neil Swainson, Phil Nimmons, Phil Dwyer, Terry Promaine, Mike Murley, Carol Wellsman, Nojo, Doug Riley and many more, who were either presenting or receiving awards.

Debbie Fleming, Suba Sankaran, Dylan Bell and Tom Lillington -- appear on a  CD released in 1999 by Michael Maxwell on the Solitudes label. The CD is entitled LOVE IMMORTAL and the label number is SOLCD83. The CD is a wonderfully arranged offering with fiddles, tin flutes, harps, pianos -- with a soothing Celtic flavour, and the Hampton-4 featured singing the words to Shakespeare's Sonnet #18 -- "Shall I compare thee to a summer's day.....".

Hampton Avenue has filmed a video for Make Lemonade for viewing on the BRAVO television network. Gabriel Napora and Triton Films, out of Vancouver produced this video, and we are very pleased with the results. It may be viewed on BRAVO's "Video Hits".

Make Lemonade is also becoming our best selling vocal chart -- being sung by choirs all over the world!  It's fun, it's easy, catchy and the message is universal and positive.